How was it formed?

Inhabited 2,000 years ago, the “Old Quarter” of Hanoi wasn’t known as the craft area of the capital, not until 13th century, 2 centuries after King Ly Thai To had decided to build the citadel in Hanoi.

Located next to the citadel, the Old Quarter quickly became the area where skilled craftsmen gathered and formed various workshops. Their families from the crafting villages slowly migrated to the area. They started crafting, and selling right in their own houses.

Each house was simply a large market stalls until they were forced to pay high tax because of the width of their stall fronts, they decided to divide them into many houses with much smaller fronts. This is the answer for your question why all the houses in the Old Quarter are so narrow. But to make up for it, all of them are much deeper (longer) than you think, some can be up to 100 meters. This is where generations of the PHO CO (the Vietnamese name of the Old Quarter) people have been living.

Once the streets were formed, they started naming them according to what was sold by those families. With the amount of workshops/stores on each street that sell the same kind of product, the reputation of the area grew so fast that it became the “business center” of the whole city.

A lot of us don’t know there are actually more than 36 streets in the Old Quarter. As the busiest ones cluster near Hoan Kiem lake, the Hanoi People’s Committee decided to preserve only a certain number of them, meaning no rebuilding unless the building is on the edge of collapsing and very limited renovation . Today it’s hard to notice the old while you are walking on these street, partly because the priority for you is to avoid the motorbikes coming out of nowhere while all pavements are occupied by having become parking lots. But up above the trees, the old roofs are still there, watching down the streets where the newbies to the city are struggling to pass a bike without blinkers going from left to right… 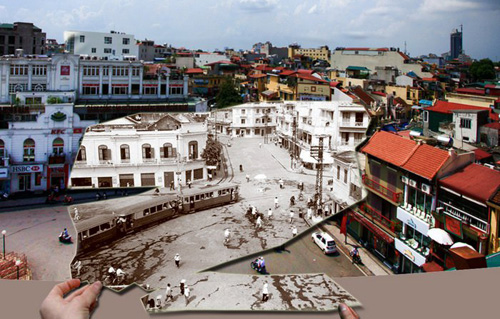 Having been there since the beginning of Hanoi, the Old Quarter witnessed all changes that have happened to the city, and have become the proof of its stamina throughout the wars. People created holes on the walls to move from houses to houses under the colony of France, though a lot of buildings were destroyed due to the bombs dropped by the air force of the US, a lot still remain. Yet people had to rebuild their homes, the traditional style is still there, and now mixed up with French Colonial Architecture.

Where to go, what to do in the Old Quarter?

When in Hanoi, you can ask a Cyclo to take you around the Old Quarter and Hoan Kiem lake. It’s fun, but on a hot summer day when it can reach 40o C, it is better to get a Xe Om (motorbike taxi) to ride you around. Enjoy the wind, and merge yourself in the flow of traffic. Watch out for the bag snatchers though, Hanoi is not serious when it comes to that, but we never know J

As a new visitor in Hanoi, you will be amazed and definitely confused by the street names, which mostly start with HANG. HANG means Store/ Product in Vietnamese, and each is followed by the name of the product that street used to have to offer back in the old days.

Now, let’s go through a few of them: 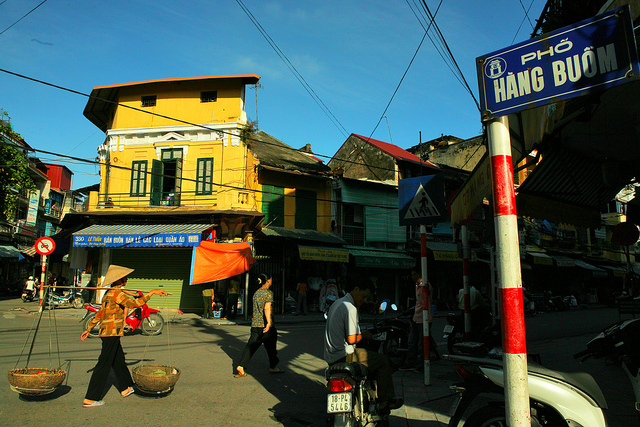 The street used to offer products related to sail boats. Now it’s full of candy shops and coffee shops on both sides of the street, which operate mostly at day time. This street is probably one of the busiest ones at night. Local and tourists walking around trying local food and bars. 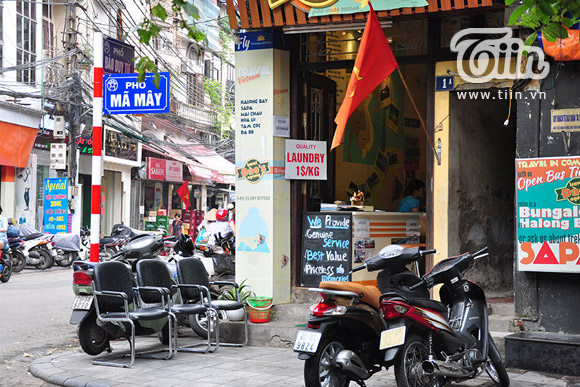 Mã Mây appears at the end of Hàng Buồm street. This is where you can find most local bars, local restaurants and also cheap hostels if you are traveling as a backpacker.

What to do:
Daytime: Walking around, shopping for souvenirs
Night time: Bars, night life 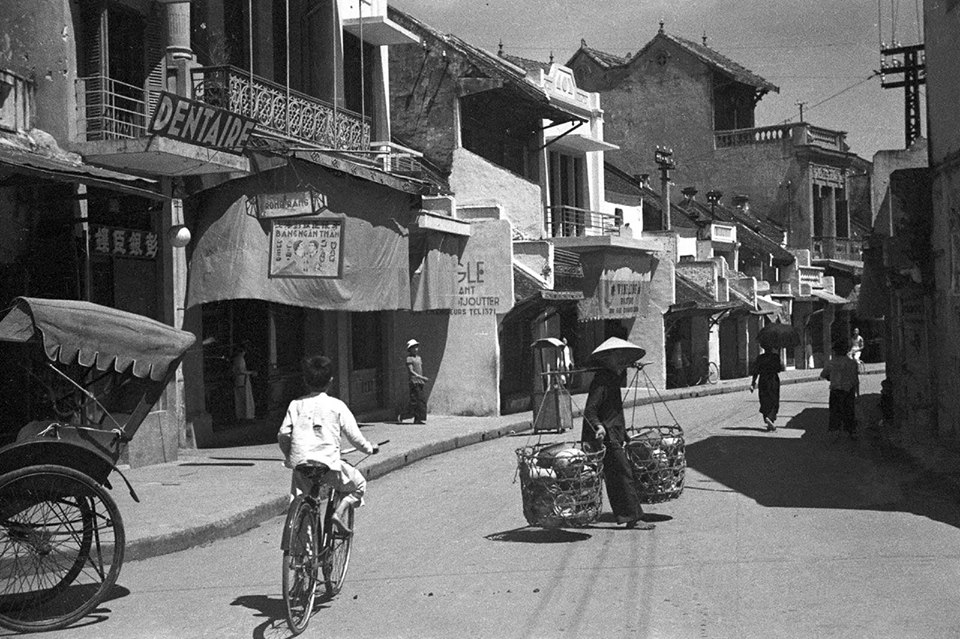 Hang Bac todayHang Bac street in 1940Hang Bac is one of the oldest streets in the Old Quarter. People originally produced silver ingots and later on jewelry. In 18th century, the shops started the money exchange business which is the reason for the French to call it Rue des changeurs in 19th century.

Today, we can still see local stores selling gold, silver and exchange money on Hang Bac. If you walk by No. 58 Hang Bac, know that you’re passing the first school for training apprentice silversmiths of Hanoi. 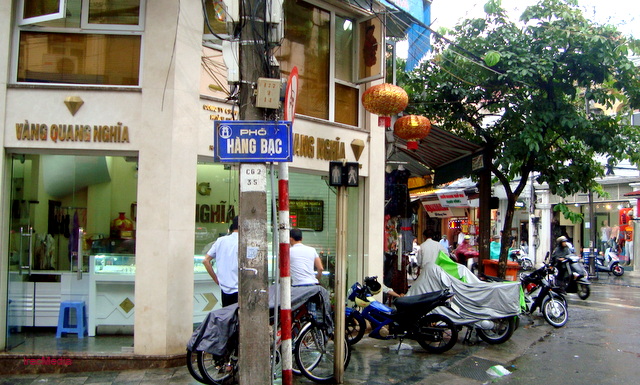 What to do:
Daytime & Night time: Walking around, shop for local silver product (might not be the best design in the world, but very much trusted by the locals who want to shop bracelets for their new born babies, as Vietnamese believe silver will suck away all the sickness from the body). 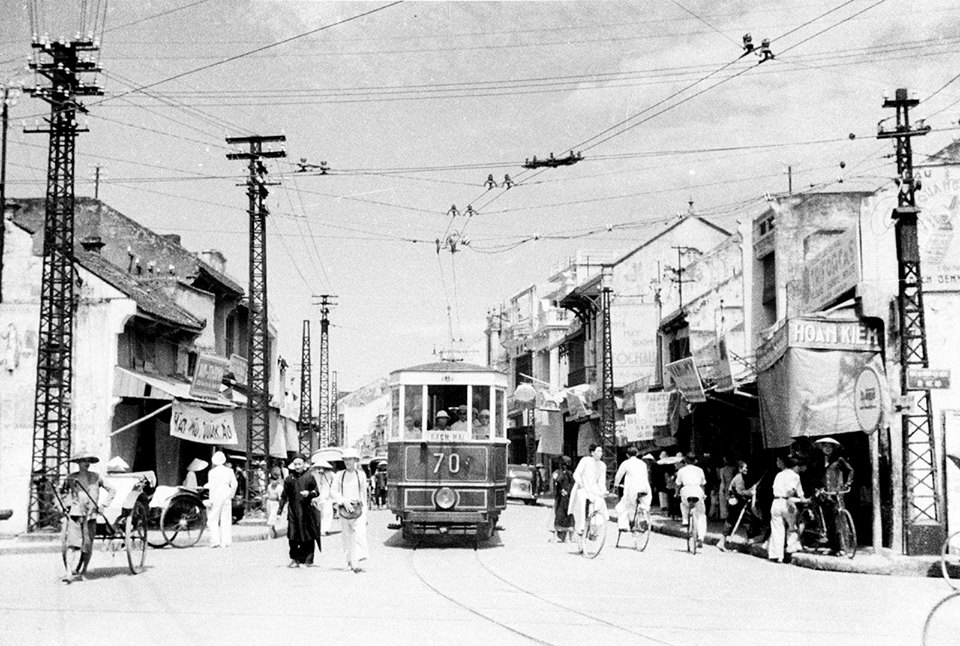 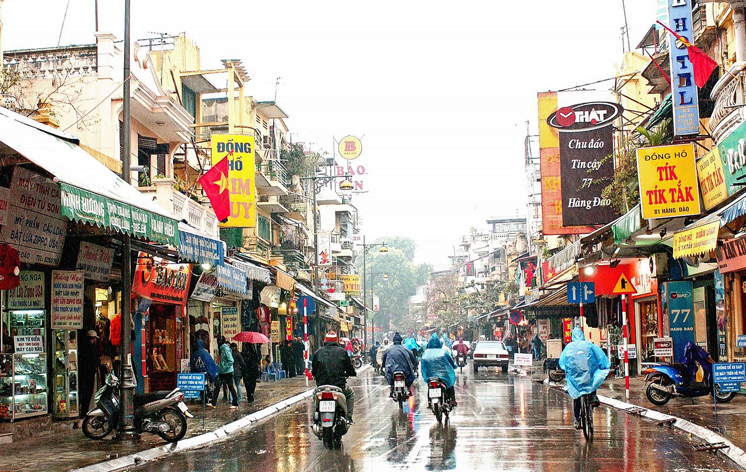 Hàng Đào street, known as Rue de la Soie in 19th century, used to offer high quality cloths (retails). Hàng Ngang street used to be the street of Cantonese from China, selling clothes from China and even India. Hàng Đường street is well known until today for shops offering us the best “Ô mai” – sugared dry fruits.  These 3 streets form a long path starting with Hàng Đào at the North side of Hoan Kiem lake, then Hàng Ngang, and Hàng Đường at the end.You can check out the Weekend night market on Fridays, Saturdays and Sundays from 18h30 to 23h00. The venders sell local products but also imported ones from China, sometimes it’s hard to distinguish them. And again, watch out for the pick pocketing. I might sound too cautious, but it’s better safe than sorry.

At the end of Hang Duong, there you can see Dong Xuan market.  Built by the French administration in 19th century, Dong Xuan market now gathers the biggest wholesale traders of the city.

As a tourist, you can go check out the handicraft items if you need to bring something home as souvenirs. It’s definitely cheaper than the stores on the main streets on Hàng Bè or Đinh Liệt etc. 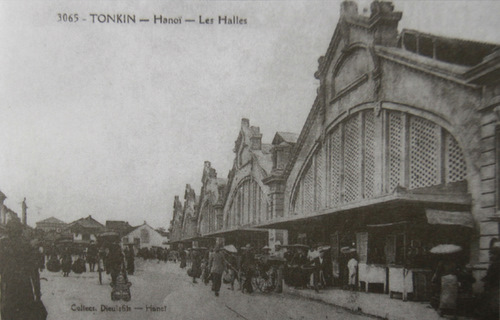 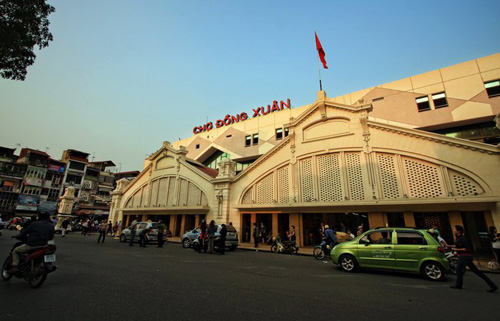 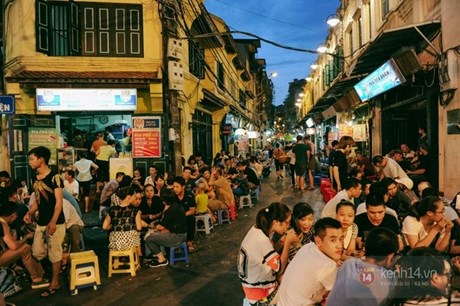 Bia Hoi (fresh beer) corner is recommended to those who would like to taste and experience the atmosphere of the Bia culture. You will be overwhelmed by the crowd who are enjoying their Beer with snack while sitting on small plastic stools right on the sides of the streets. It’s a touristic place definitely, and it’s called the “International intersection” by the locals, as you can meet people from all, I mean literally all places. 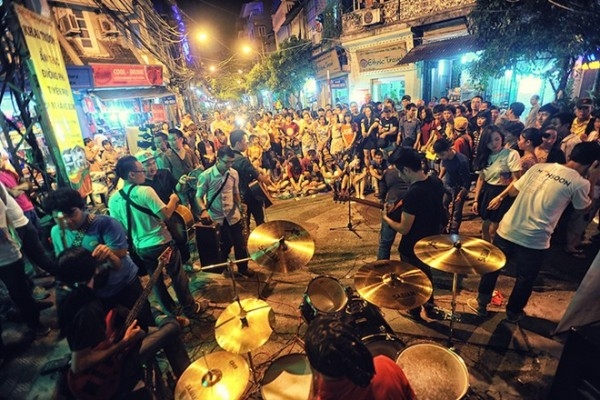 It gets crowded from late in the afternoon daily, rest assure that you don’t have to check the calendar to make sure you can experience the chaos.

As the Old Quarter is for walking from 18:00 on Fridays, Saturday and Sundays, make sure you can find a spot to park your bike.
My advice: go to the parking lot under Chuong Duong bridge (before entering Nguyễn Hữu Huân street). It’s a big parking lot and you won’t suffer the hassle like some others.

However much one tries to describe, the plain words can never bring you the real Old Quarter of Hanoi. Some come to Hanoi, stay at the Old Quarter for 2 days, hate it and never come back, some love it on the 1st day and still don’t want to leave after staying for more than 2 years. But you will never know how it is to you, unless you take your own steps on the streets, inhale the smell of the city with your own nose, and see the chaos with your own eyes. It’s an adventure, and only you know what it will turn out to be.

BIG THANKS to Giang Trinh – a photographer, a Hanoi lover for the Featured Image.
Check out his Facebook to see more photos of Hanoi: GIANG TRINH’S FACEBOOK

There is no author description yet. 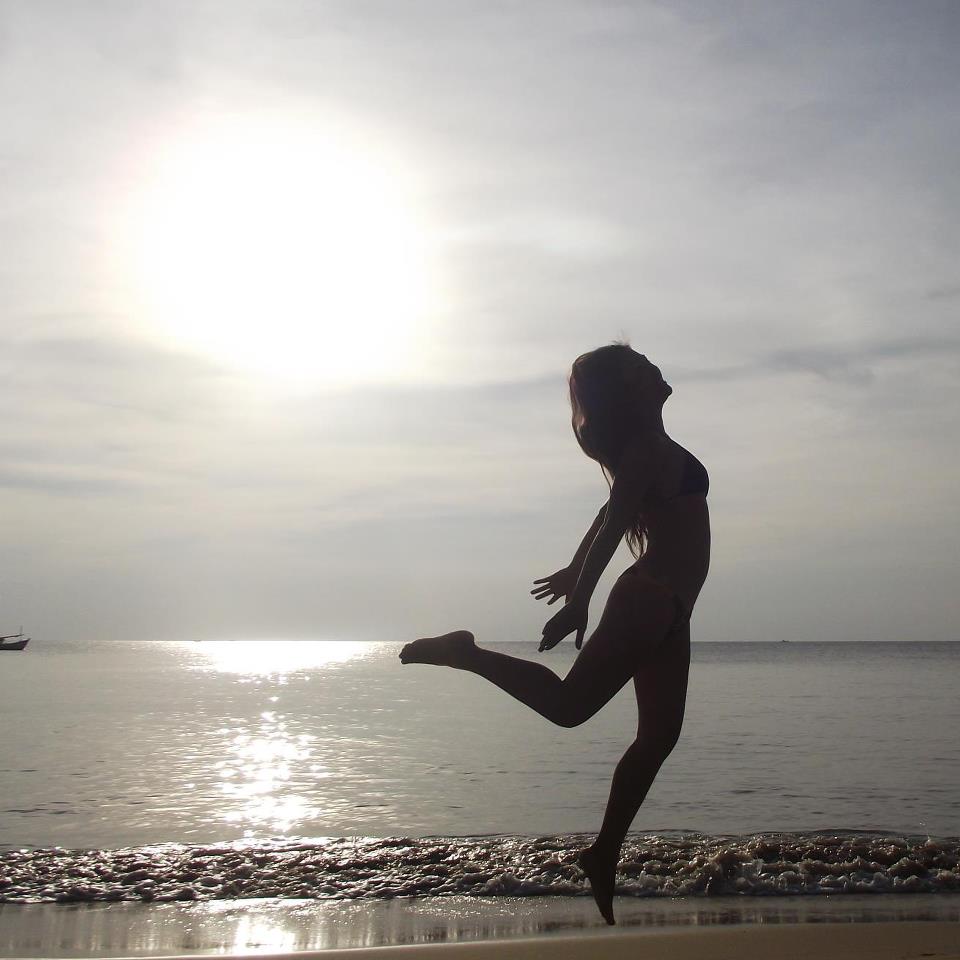 Hi there! I am a travel and food lover. I enjoy meeting people and experiencing new cultures. I love technology and video games, and I'm a big fan of my niece :)